has been grooving since 3 years of age. She began her dance training in New Jersey at Dance World Academy and R.A.D. (Royal Academy of Dance), later touring the east coast and on Carnival Cruise Lines with Connecticut-based Dance 10 Touring company. Kristi Ann received her BFA in Dance at The College at Brockport in 2010; where she met Rebecca Sproul Gushue and has danced for Gushue Moving Arts since 2007. She worked with Barkin/Selissen Project (NYC) as both a performing artist and administrator from 2012-2019, shifting her managerial expertise to the Cliffs Climbing + Fitness as Assistant Manager from 2019-2021.

Kristi Ann is a CMG-Represented Stunt Performer, and has recently worked with Kate Griffler, Jeff Shortt, Janis Brenner, and at STREB Lab for Action Mechanics. Kristi Ann has been an artistic collaborator with The DynamitExperience (KC/NYC) since 2019; taking on the Operations Manager role in 2021. In addition to consuming copious amounts of coffee, she currently dances with 3rd Law Dance Theater of Boulder, CO (actively seeking airline partnerships to schlepp herself and her better-French-Bulldog-half, Stella, across states…).

Dance found me at an age long before I could intellectualize my attraction to the field. As a quiet and surprisingly shy child, dance offered an honest method to communicate. It provided a separate entity of myself and my world which I could objectively analyze, comprehend, troubleshoot, challenge, and improve. I am perpetually intrigued and motivated by the process, the gritty work of daily rehearsal, and the artists with whom I share these days. The accessibility of dances' physicality provokes a visceral response from the audience, uniting a spectrum of humans who may otherwise never interact outside of their usual circle. I take pride in bringing together these different worlds and am drawn to artists and choreographers who do the same. 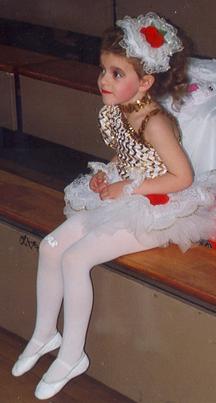 "I just don't know what we're going to do with you, young lady."